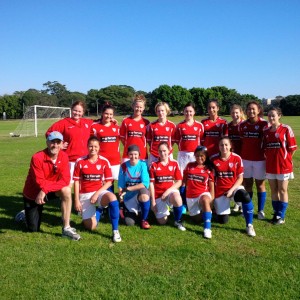 The ladies played their semi final cup tie against the highly rated UNSW AAW2 with great passion and created many a chance that could not be converted. This came to haunt us as two breakaway goals and a speculator from out on the right wing had us go into the break three down. The score didn’t reflect the way we played, with our team made up of a 3s and 4s combined side punching well above their weight. We put a fright into the opposition with some great team attack with 3 touch passing and snap shooting which kept their keeper on her toes. The second half the girls again were the better team and after replying with a goal to make it 3-1continue to pressure the opposition high just missing a few more opportunities to close the gap. The opposition only scraped another goal with an awkward shot slipping under Terri in goals, making the second half a creditable 1-1 scoreline. With the form shown against a strong team in a division higher, things are looking good for the Pagewood women in 2014. Although a real team effort was displayed by all the best performances of the day came from Niamph and Mo.

A thrown together 45s side found themselves in a second round tie against Dunbar 35s after defeating a UNSW side full of 20 year olds two weeks earlier. Suckers for punishment at this stage of our careers, our rag tag bunch only had 7 players shortly before kickoff but the commitment by those who came only to watch and rest their injuries eventually took over and our team started with 10 as the whistle blew. Shortly after we got our full 11 on the field we were looking for a respectable performance but took the lead earlier than expected. The arm wrestle continued for the remainder of the half with both teams creating opportunity but with the men in red playing well below their age group. The half time was all about recovery and not to injure ourselves any further with a game on the weekend in mind. Against the script that should have the younger side coming over the top the more experience Pagewood heads netted another three goals to go to a 4-0 lead. Not too sure what to do next, the lads continue to attack with some great ball movement and at some stage believed we were at our youthful best once again. That was quickly squashed as Dunbar scrapped 2 goals from nothing situations, to give them a more than creditable scoreline that didn’t reflect the old boys dominance. As the sun set the 4-2 score wasn’t altered any further and reality set in that we were to continue our quest for cup glory, against the odds and given the sides we had opposed.

The game started off with us being a little slow of the mark but not conceding possession and was fairly even. As the first half progressed we tired quickly as we had only played the previous round 2 days before and that went into extra time. We conceded 2 sloppy goals and went into half time with that scoreline. The second half we started stronger and had them under pressure and pinned them back for about 15 minutes but then conceded another sloppy goal. We kept going for it and we pulled a goal back with 20 minutes to go and had some good momentum. Unfortunately a mistake at the back cost us another goal and we ended up losing 4-1. The boys tried their best and were clearly physically drained from the previous game but held their heads high.