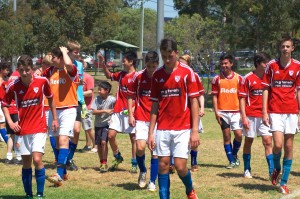 Jason scores a magical golden goal in the 6th minute of the first period of extra time to break the deadlock and put Pagewood in a history making Grand Final.

The stage was set as 72 teams locked horns at venues across Sydney on Sunday, 12 October 2014, in the FNSW Champion of Champions tournament. Pagewood Botany Football Club Boys 16 years were up against Pendle Hill Football Club at Ray Marshall Reserve #3, South Granville with a Grand Final spot up for grabs. Conditions were hot for a 10:15 kick off, our boys started confidently with a slight hint of nerves, as this is the deepest this team has been in this tournament.

A healthy crowd watched on, with very few scoring opportunities created and no real clear cut chances produced by either team provided a tense and tight first half; score 0 – 0. After the break, both teams came out knowing one goal might be enough to seal the win as the hot conditions were going to take their toll on the players.

Pagewood had a few opportunities midway through the second half, Jason’s run down the left side got him behind the defense and the cross to the six yard box was cleared inches from Dylan’s run for a corner. Five minutes later the Pendle Hill’s defense was found wanting and allowed Dylan through on goal, but Pagewood was denied again by a brilliant save by the keeper who got down early to parry the ball safely away.

Pagewood were starting to assert themselves over their opposition and this was due in part to their fitness, this has been a big asset that their coach Bill K has built over the last few seasons. Also the solid work of their keeper, Istvan, showed in disrupting Pendle Hill’s attacks and dealing with their dangerous ball in the box so confidently. A titanic tussle in the second half and still 0-0. In the 6th minute of extra time, Brodie’s clever play to drag Pendle Hill’s central defender (the opposition’s best player) away from his position was brilliant. This allowed Jason to break through the defense from Anton’s delicate through ball and confidently put the ball past the keeper into the back of the net for a well-deserved win.

It has been 34 years since Pagewood Botany Football Club won a FNSW Champion of Champions Grand Final.